You should spend about 20 minutes on this task.
The charts below show changes in the cost of visiting a national park in the country from 2011 to 2018 as well as the number of visitors to national parks each year. 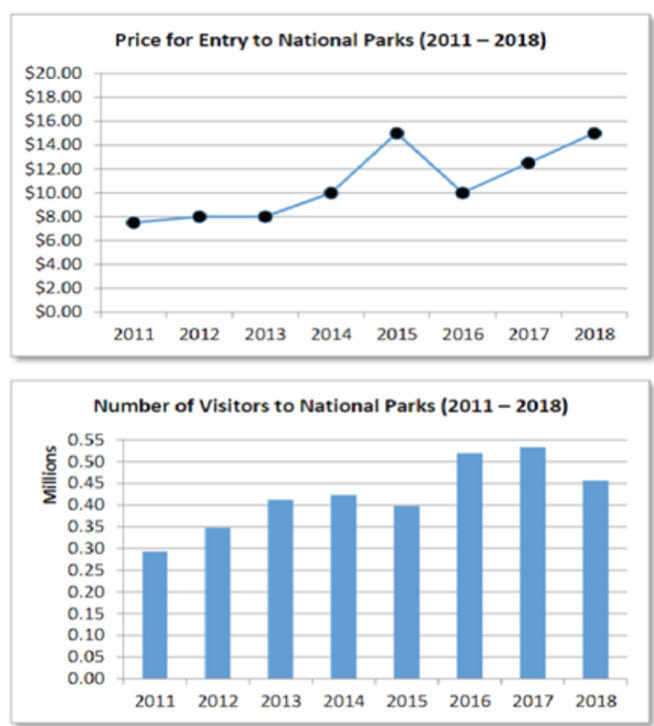 Summarise the information by selecting and reporting the main features, and make comparisons where relevant. Write at least 150 words.

In 2011, almost 300,000 visitors came to the national park and guests continued to increase for the next two years, while the entry price of $8.00 remained the same these years. By 2014, the national park impose an additional $2.00 increase, and the number of visitors reached 400,000, a third of an increase within a year.

In 2015, the entrance fee increased to $15.00, and the number of visitors slightly decreased, but after reverting to the previous price of $10.00, the guests count skyrocketed to half a million in 2016. Although the price increased again by $2.00 just after a year the movement of patrons continued to move upward, but a reduction of 50,000 guests happened in 2018 upon reinstating the $15.00 entrance fee.

The line graph compares the entrance fee of the National park while the bar graph shows the number of visitors from 2011 to 2018. Overall, the price doubled within the span of eight years while there was no significant increase in guests.