The first chart below shows how energy is used in an average Australian household. The second chart shows the greenhouse gas emissions which result from this energy use. Summarize the information by selecting and reporting the main features, and make comparisons where relevant. 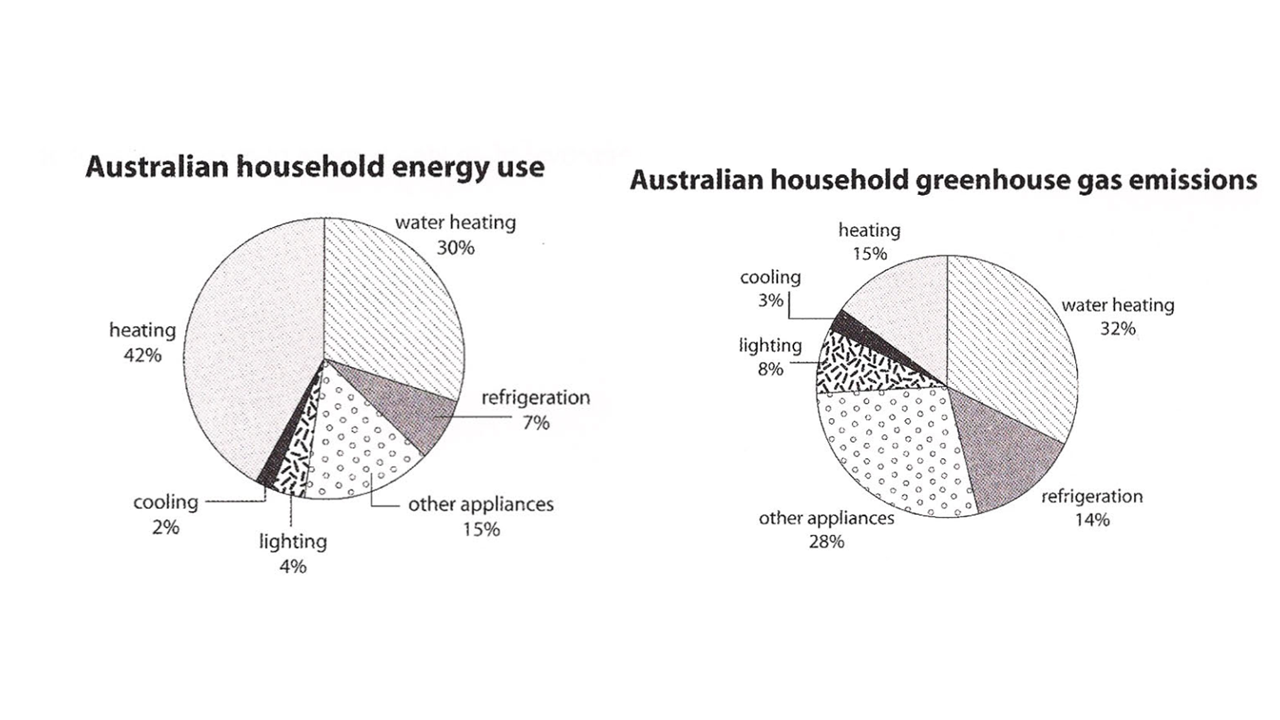 The data compares the utilization of energy and its greenhouse gas emissions in an average household in Australia. Overall, general and water heating has the highest energy use and has a large contribution in the emission of greenhouse gas.

Majority of the energy used by Australian is mainly for heating, accounting for 42% and 30% for water heating while only a fifth of the energy is generated for refrigeration and cooling, 7% and 2% respectively. A small fraction of the power is used in lighting while 15% is for other appliances.

A third of the greenhouse gas emissions in an average Australian household are coming from water heating, and only 15% for common heaters. Other appliances produce 28% of the emission which is half of the percentage compared to the gas released from refrigeration. The emission from cooling and lighting are only a small percentage compared to other sources with a combined gas emission of 11%, 3% and 8% accordingly.

The data compares the utilization of energy being used from an average household in Australia versus the greenhouse gas emission coming from the appliances. Overall, with the exception of general heating, most appliances either have similar gas emission produced from its usage or doubled.

A third of the energy being used is for water heating and has almost the same output of gas emission of 32%, and this trend is the same for cooling with 2% of the overall power consumption and 3% for emission. Some appliances follow a different pattern where the emission is doubled from the generated energy such as lighting and other appliances which doubled from 4% and 15% respectively. For general heating, almost half of the power is used in an average household in Australia, accounting for 42% however, when compared to the gas emission it is three times lesser, 15% which is almost the same output as refrigeration.

Ian Tanpiuco created Educatorian in order to practice his skills in Writing and SEO. He is a Junior Web Developer in an ESL school in the Philippines while also doing some ESL Tutorial online. His goal is to create his own Learning Management System + Website that will allow students and teachers to connect. He also wants to practice his writing and speaking skills including digital marketing.