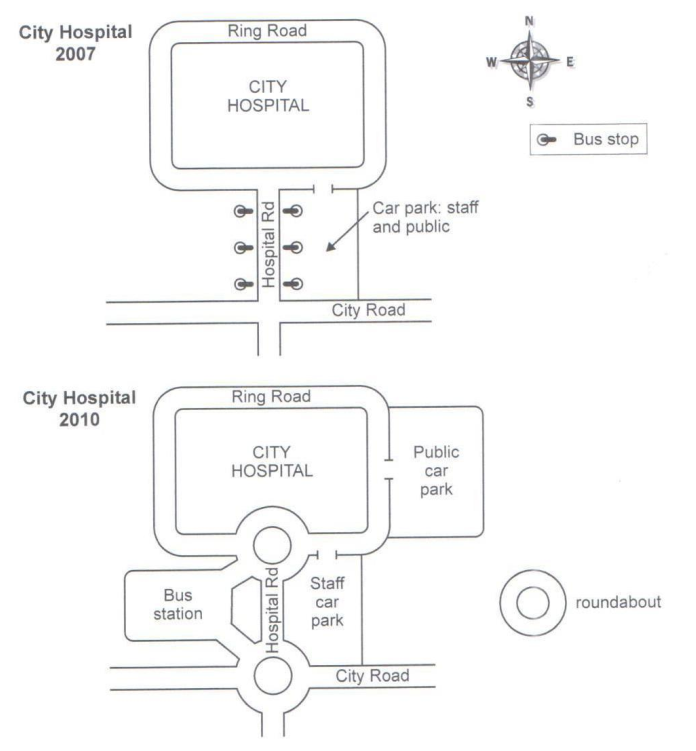 Summarize the information by selecting and reporting the main feature and make comparisons where relevant.

The two maps compared the 2007 road map of the city hospital and its development in 2010. Overall, there were changes in public transportation, intersections had changed to roundabouts, and a dedicated car park for staff has been constructed.

In 2007, there was an intersection between Hospital Rd (northern side) and City Road (eastern side). After three years, this intersection had changed by a roundabout connecting to the bus station (western side) and Ring Road (northern side). Bus stops along the Hospital Rd were removed, and the public and staff parking lot next to the Hospital Rd became a dedicated lot for hospital staff only. This staff park and Hospital Rd were intertwined to the City Road and Bus station via two roundabouts. The Ring Road surrounding the City Hospital opened additional gates. One is going to staff Cark park located south-eastern part while the other path is going to the public car park on the eastern side of Ring Road.

The two maps compared the 2007 road map of the city hospital and its development in 2010. Overall, there were changes in public transportation, intersections had changed to roundabouts, and a dedicated car park for staff has been constructed.

In 2007, the city hospital was surrounded by Ring Road, and there were only two paths going to the southern part. One was going to the cark park for staff and public use while the other road was the Hospital Rd going out to the City Road. There were six bus stops, three on each side of the Hospital road.

In 2010, the Ring Road opened another road in the eastern part where a car park was built dedicated for public use while the old car park is for hospital staff. The bus stops were removed, and the path from Ring Road to Hospital Rd was changed to a roundabout interconnecting to the new bus station and another roundabout connecting to City Road.